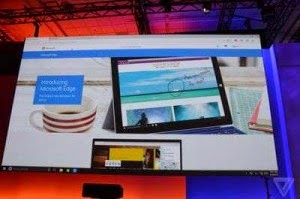 While Microsoft Edge is the successor to Internet Explorer, Microsoft will keep its aging browser around for enterprise customers. Microsoft Edge is designed to be basic and minimalist for the future, and early previews include new features like digital ink annotation, Cortana integration, and a built-in reading list. “You’re going to care about the blasting fast technology that’s inside it,” said Joe Belfiore on stage at Build. Microsoft Edge will be the default browser in Windows 10, and the one that most consumers will use to browse the web in Microsoft’s next operating system.
SOURCE: MSN
Samsung Galaxy Tab S2 8.0 & Tab S2 9.7 Now Official